The process of converting scanned film images to individual frames and avi movie files is not too complicated. The math and logic behind the methods are quite simple. Basically, you have to identify the sprockets, pick off the images, and compile them into a movie file. Identifying the sprockets sounds easy, but actually makes up about 90% of processing time and program code.

My program is built around a graphical user interface (GUI) to allow the user to be able to use the same code for many different operations including scanning and processing film, reprocessing a set of previously scanned film images, continuing a project that was interrupted before completion, or compiling a movie file from previously captured frames of a film. 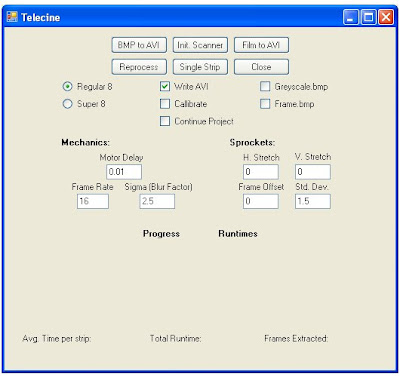 The user may choose regular 8, super 8, frame rate, motor delay (time to wait between sending signals to the motor), automatic or manual calibration of sprocket size and position, and whether to create debugging images.

The main program simply keeps track of the number of scanned images and the number of frames that have been picked off and orchestrates the execution of the routines that advance film, initiate a scan, process the scan, and create the movie file.

In general, the program executes the following suedo-code:

The next sections cover the algorithms for finding edges and sprockets in more detail.

A lot of time can be saved if the scanned images of the film are straight, consistent, and have little extra space above and below the film. In general, the top and bottom edge of the scanned film image should come as close to the film edge as possible. The edges of the film may even be cut off slightly, but cut too much off and the program will be unable to accurately find the sprockets or the frames.

Go on to Bitmap Tutorial