Computer
You will want a computer with a decent processor (P4 and above over 2.0 GHz) and you might consider a multi-core solution (depending on how patient you are - or aren't). You will definitely need a large hard drive (500 GB is nice, but you may want more if you plan on doing multiple projects at a time). The computer must have some kind of communication port. I prefer the ease of using a parallel port; however, someone more clever than I might be able to make use of the USB port for communicating with the Film Advancing Device.

Scanner
You need a good film scanner. I started my process using an Epson Perfection 4870 that I got re-manufactured for about $200 in 2006. In May of 2008, that scanner stopped functioning correctly, so I replaced it with an Epson Perfection V500 Photo scanner for $250. The only modifications to my system that I had to make were adjustments to the plywood base that positions my scanner and I had to make a new frame for holding the film in place on the scanner bed. If you choose to use a different scanner, you are on your own for figuring out keystrokes to control the scanning software. The scanner's optical resolution is very important. The purpose of scanning the film is to be able to preserve the original quality even though the film will continue to deteriorate. I recommend a resolution of 4800 dpi, but the V500 has the ability to scan at 6400 dpi optically.

Sprocket
Old sprockets are found in projectors and film editors. I found film editors to be the easiest, most useful and cheapest source (about $20 on ebay including shipping - cheaper if broken). Movie cameras are NOT a good source because unexposed film has different dimensions. Try to get a dual 8 sprocket that will do both 8mm and super8.

Stepper Motor
I suggest KP4M4-001 (found in very old disk drives). I happen to be a student at BYU and our electrical engineering department has a lab with lots of these motors, so they gave me a couple. I don't know where I would find them otherwise.

Drive Chip, Circuit Wiring, & Communication Port
The ULN2003 is basically 7 logic gates in a single chip. The pins on each side are electrically isolated from each other. When current is passed through a pin on one side, it allows current to flow through the corresponding pin on the other side. In this way, you can use your computer's 5V I/O ports to control a 12V stepper motor. The power for the stepper motor can either come from your computer's 12V supply, or from an external DC power supply. I use 15V power supplies from Radio Shack. The image below is the wiring I use for my circuit and controlling chip for powering the KP4M4 motor. Note that there is a 15V Zener diode between the +12V and pin 9 of the ULN2003 to prevent electrical back flow to the computer as the motor winds down (a very good idea).

I used the Parallel Port because it seemed the easiest and most intuitive. Serial and USB may also be used, but I don't know how to do it. Only pins 2-5 of the parallel port are used in making the device (Pin 2 is the Data 0 Pin in the diagram above).

BEWARE: applying the wrong voltage or incorrectly wiring a circuit connected to your computer's communication ports will likely destroy your computer. If you are not comfortable with the risk of frying your computer, then you need to learn more before playing with this stuff. Anything you choose to do is at your own risk.

Gears & Structure
You are on your own for designing and building a gearbox. The two pictures below are different versions I made. One of the boxes is a jewelry box and the other is an inverted tissue box (both are unfinished hardwood) that I got at Joanne's Craft Store and can be found at most any craft store. The gears all came from a VEX Gear Kit that I bought at Radio Shack on clearance. I used plastic/metal cement to attach one of my sprockets to the gear in one of the designs. In the other, I used a Dremmel Tool and friction fit the sprocket onto the gear. The gear on the stepper motors are both friction set. I used 1/8 inch round hard wood dowels for axles. The gears rotate freely on the dowels, but the dowels are glued into place. 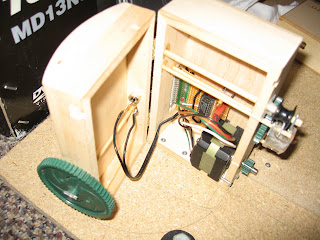 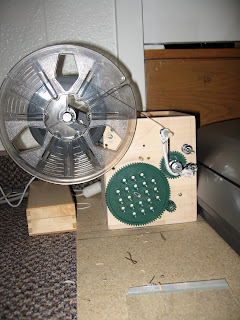 This last gearbox has an automated take-up reel. To turn the reel, I used the take-up arm from an old projector with the friction mechanism still intact. I used a 1/8 inch square metal dowel to connect the large gear on the outside of the box with a smaller gear inside the box. I had to reshape the gear inside the box to fit snugly with one of the other gears from the projector which turns the gears in the take-up arm. The take-up reel was a bit tricky to figure out, but sure beats finding 400 feet of film on the floor each morning. 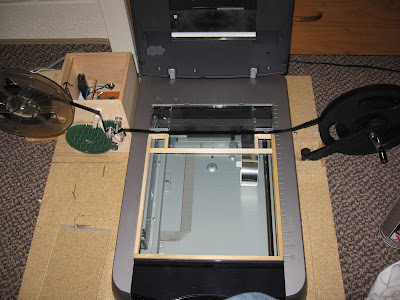 I built a film guide that sits on the scanner bed to ensure that I get as little rotation and variation in film placement as possible. The guide consists of 2 pieces of plastic and a wooden frame. Turns out that thin CD jewel cases are just about perfect as film guides. Each of the plastic guides is actually two pieces of plastic glued together. 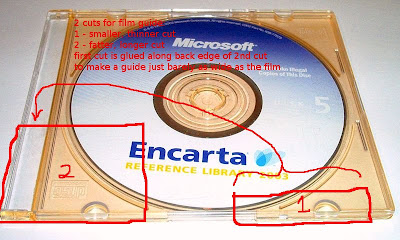 The first is just wide enough to hold the film (the film should move free when the guide is assembled, but the closer the fit, the better). The second piece is cut from the hinge side of the case and is long enough to position the film at the optimal distance from the top of the scanner to get a good scan. Together, the plastic and wood should fit snugly onto the bed of the scanner to prevent as much vertical movement as possible. 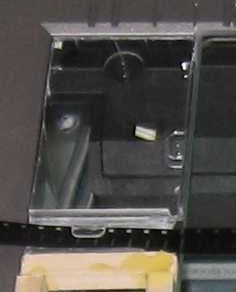 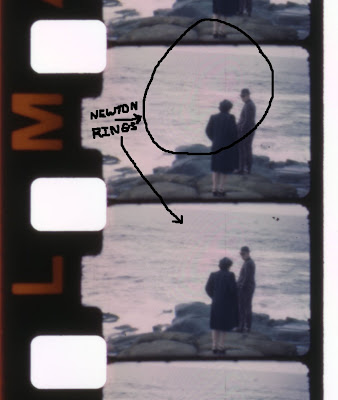 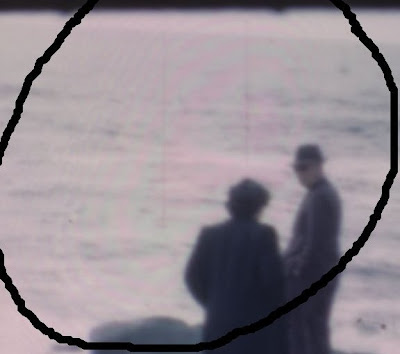 Although light in these images, Newton rings show up on the video. They can be disipated with Anti-Newton ring glass as seen in this scan of the same frames from above: 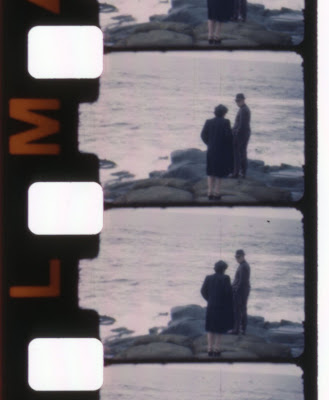 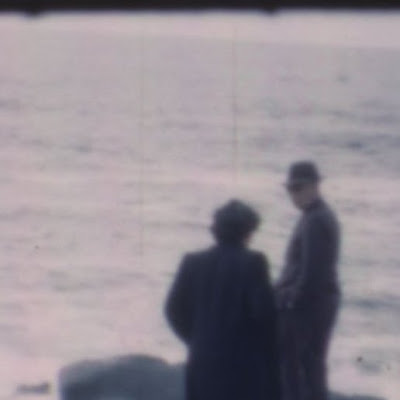 Originally, I used 2 pieces of 4x6 inch anti-Newton ring glass to help eliminate the color rings. With the new scanner, I use 2 pieces of 2x6 inch anti-Newton ring glass. In both cases, a single pane of glass is 2mm thick. The glass had to be special ordered from here for $38/pane for the 4x6 or $20/pane for the 2x6 (just ask them for a quote on the size and type of glass you want). One piece of glass sits directly on the scanner bed ("fuzzy" side up) and the film goes over it. The other piece goes on top of the film ("fuzzy" side down) to sandwich the film between the coated sides of the glass. The weight of the glass also helps eliminate curl in the film. Both panes of glass should have completely smooth edges on all sides to avoid scratching the film. I have not noticed any scratching on the film as a result of the glass itself, but any hard particle sandwiched between the glass will scratch film moving past it.

Wow this is sooooooooo cool.

I have a bunch of 9.5mm film from the late 40s. There are a lot of torn sproket holes so I may have to feed it by hand, but even that will be a joy considering the end result.

Thanks for taking the time to share you design... I can't wait to build mine.

Thanks again... you da man.

Pilgrim, glad the information is useful. If you would like to discus ideas and improvements, feel free to contact me - I'd like to hear what you come up with (digireel@gmail.com).

Also, I had about 3 feet of s8 film that was damaged in a projector such the film was sliced down the middle of the sprocket holes. My machine was still as to feed the film with only a presstape fix about every 4-6 inches. Hopefully your torn sprockets aren't too bad. I'll bet if you get a good design feed and guide around your sprocket for your 9.5mm that really hugs the edges of the film, you can probably get away with it.

Did you find that the film initially came off the drive sprockets? I noticed that you have something like a stretchy strap from one roller to another which is stretched across the film. Will that damage the film, or doesn't it matter since the scanning has already taken place?

The film will not contact the sprocket as I have it set up without some kind of guide. The easiest and cheapest guide for me is this "strap" as you say. It is simply a piece of 100% cotton (from a T-shirt) that is old enough to be lint free and soft. It is not stretched tight (actually quite loose) and applys almost NO pressure to the film at all - it is just there to gently guide the film. I made a long "tube" out of the cloth by rolling two sides of a long strip together and sewing them up. Then I added the loops at the ends to hold it on the pegs. Since the film is cleaned with 100% cotton T-shirt cloth anyway and since there is no pressure on the film, this does not damage the film any more than a cleaning does (not at all). I am in the business of preservation, so I would not be happy if I was able to scan the film at the expense of the film itself - I want to keep the originals.